After the New York Yacht Club (NYYC) announced the concept last year, the incredible IC37 by Melges project has come to fruition this week, with hull #1 now doing sea trails on Narragansett Bay.

Southern Spars were proud to be selected by the NYYC as a partner in this project, along with our sister company North Sails, with the aim of creating a one-design concept that would become the next generation in Corinthian competition. After a decade of incredible competition with the Swan 42 One-Design sailboat, the new class will now carry the Rolex New York Yacht Club Invitational Cup into its second decade, and beyond.

Unlike the Swan 42, which was built to cruise and race both around the buoys and offshore, the IC37 is purpose-built for competition. To each of the yachts built, Southern Spars will be providing a pre-preg carbon fiber mast with regatta splice and Southern Spars boom, ensuring that the class can push performance to the maximum.

Along with Southern Spars and North Sails, Westerly Marine, yacht designer Mark Mills, Harken and Melges Performance Sailboats are part of the team of industry leaders involved with bringing this boat into existence. The combination of products from these industry leaders will ensure a level platform previously unseen for boats this size.

With 40 boats already on order, including 20 from the general sailing public, it is clear that this class will be setting a new standard for true one-design racing.

Southern Spars takes to the air

On the back of the successful track cycling wheels and the Emirates Team New Zealand America’s Cup yacht, latest composite creation from Southern Spars is taking to the air. Custom made, ultra-lightweight and super durable medevac stretchers have been delivered to… 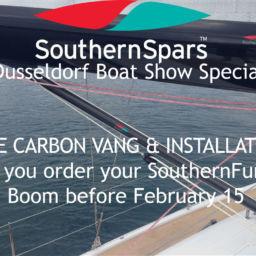 Southern Spars is offering a special deal for customers purchasing their Southern Furl in-boom furling systems surrounding the Dusseldorf Boat Show. Any customer who signs an order for a boom for a Europe-based yacht between 35 and 70 feet before…