Originally founded in 1999, Future Fibres was combined with Southern Spars’ own Composite Rigging business in Nov 2014, forming a company with over 25 years collective rigging experience. They produce a comprehensive range of carbon rigging products, meeting the full spectrum of needs for yachts, as well as many non-marine applications

Future Fibres produces world-leading carbon cables for standing rigging for supporting masts, and torsional furling cables for both downwind and headsails. The flagship product, ECsix, is a continuous multi-strand carbon cable, which changed the world of composite rigging with its longevity and ability to resist compression – an area that was once an inherent weakness for carbon cables, has become ECsix’s greatest strength.

The properties of Future Fibres cables have drawn the attention of many industries outside of yachting, and have seen them used in motorsport, civil engineering, architecture, aerospace and defence. 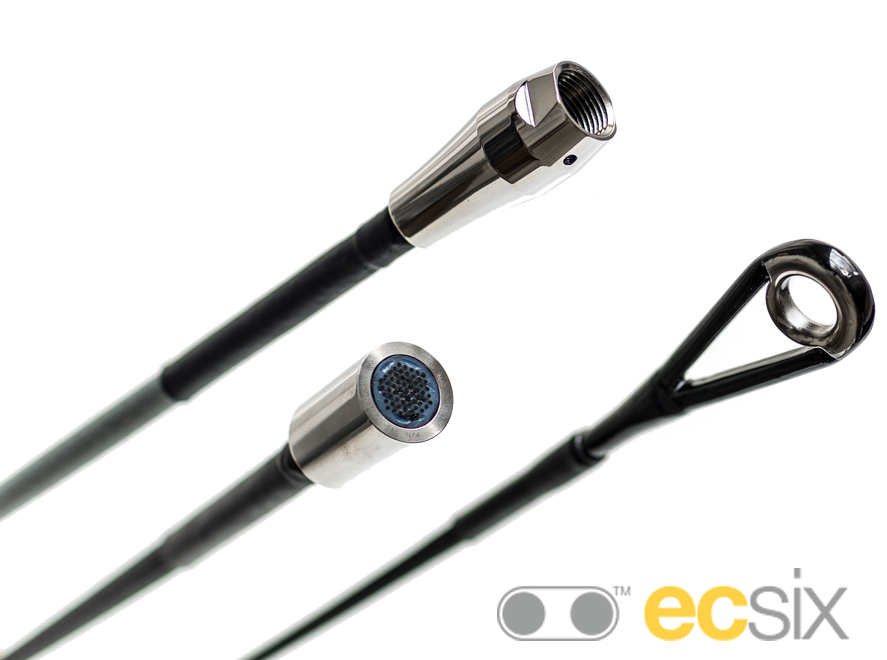 ECsix‘s unbeatable combination of strength, aerodynamics and durability make it suitable for everything from performance cruisers, round-the-world racers and 300-foot mega yachts.
Since its inception in 2004, ECsix has been installed on over 500 yachts, clocking up more than 1 million miles around the world, without a single failure.
Reliability: The patented bundled-rod construction makes it flexible and immune to fracture from compression, a stay can sustain over 25% damage and remain operational.
Performance: ECsix will save up to 70% of your rigging weight. This increases your righting moment and reduces fore-aft pitching when sailing, dramatically increasing your sailing performance. Reducing weight aloft also minimizes rolling at anchor, making life aboard more comfortable.
Logistics: Because they can be coiled, fabrication of our cables can be completed in the factory, not on the dock. This allows us to achieve greater levels of quality control and accuracy, and much faster installation times, getting you out sailing sooner.
ECsix is relied upon almost universally by sailing’s elite, including the Volvo Ocean Race, TP52, Super Maxi, Mini Maxi, IMOCA 60 and Americaís Cup fleets. 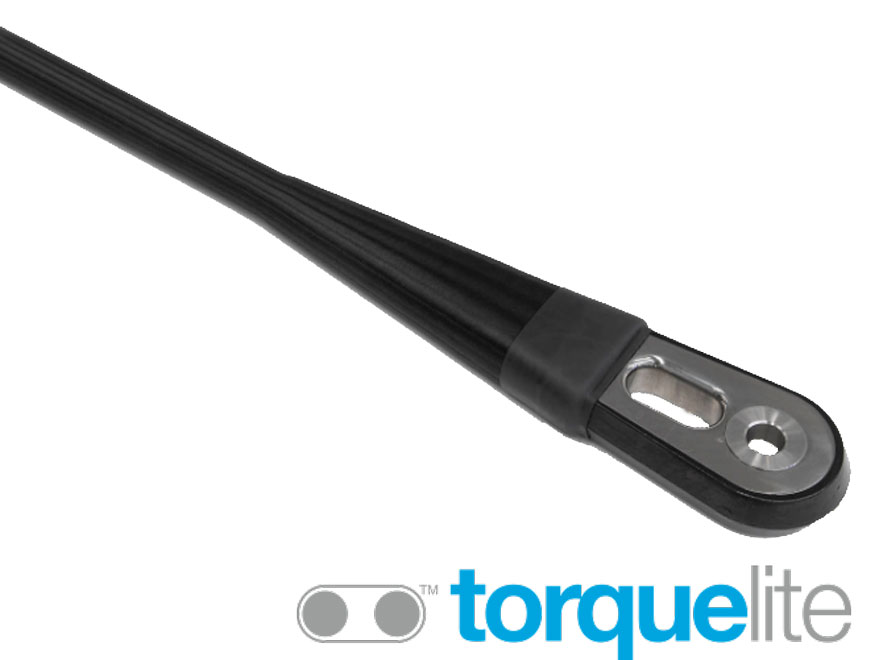 Developed for the America’s Cup and IMOCA Open 60s, Torquelite stays revolutionized the handling of large downwind and reaching sails.

Available in both top-down and bottom-up configurations, they allow large sails to be furled and unfurled for easy deployment and dousing.

Using continuous winding of Kevlar or PBO fibres, Torquelite cables enable high torque transfer while remaining flexible. The soft core of the cable means excellent torque transfer from your furling system to the sail, while still allowing a furled sail to be dropped, flaked or coiled, and stowed ready for the next use.

The titanium terminations used in Future Fibres’ cables means they can be adapted to all furling unit manufacturers and are suitable for use on boats from superyachts and America’s Cup to family cruising yachts ranging from 30 to upwards. 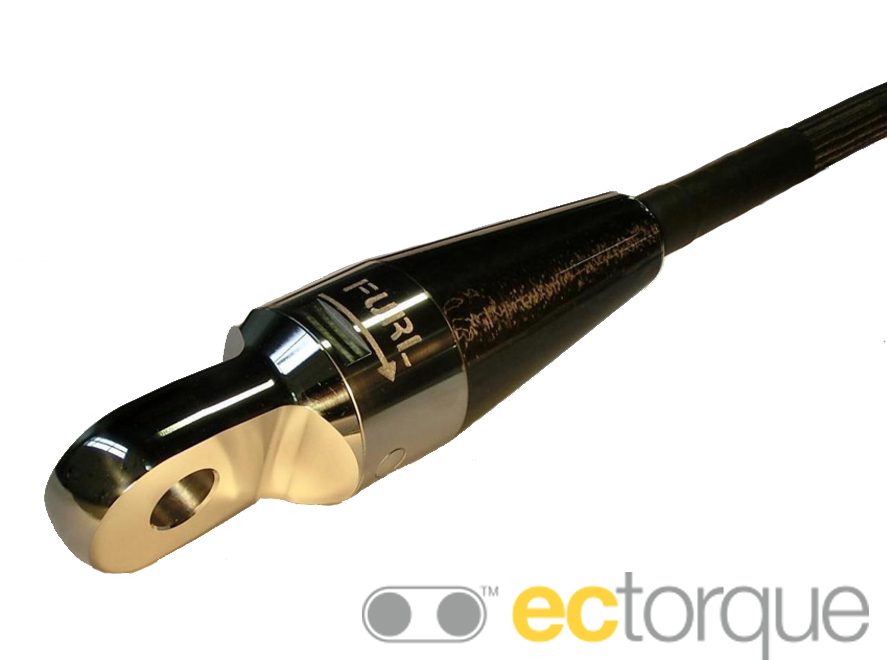 ECtorque are carbon forestays that replace existing furling foil systems, enabling you to put your sails away quickly and consistently, making sailing easier and safer.

ECtorque stays allow sails to be hanked directly to the stay for performance gains with the addition of the safety and ease of handling of a conventional furling system.

ECtorque has the same multistrand construction as ECsix and allows the removal of the conventional foil system, giving sailors more than 50% weight saving and almost 70% drag reduction, while saving 15% in cost – all while improving their boat handling.

Each stay has custom designed torque characteristics to match the requirements of the yacht and sail plan, so maximum performance and lightness is ensured.

Like ECsix, ECtorque stays are easily retrofitted to any yacht and are compatible with a huge range of the world’s best furling motors. 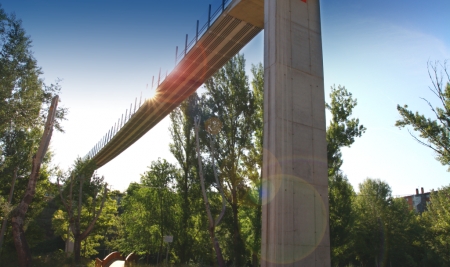 Civil Engineering: The world’s longest stress ribbon bridge was awarded the JEC Innovation Award 2012 in the construction category. Future Fibres provided carbon fibre cables as the primary load-bearing supports of this footbridge built in Cuenca, Spain.
The final design involved 16 lines of cables, side by side, made up of five individual cables joined with link plates, to achieve the required 216m long, 3m wide footbridge. Each of the eighty, 44m long, carbon cables had a working load of approximately 95 tonnes, a diameter of 42mm and weighed in at just less than 100kg.
Unsupported spans were significantly increased, supporting structure was reduced and installation time and cost were reduced by over 80%.

Cranes and lifting: While crane designs have experienced radical change in the last decades, wire cable for lifting has remained essentially the same for around 100 years. However, innovative Future Fibres composites high performance cables offer an interesting alternative to traditional steel cables. They have distinctive benefits such as weight reduction, improved fatigue resistance, extended cable life, reduced maintenance cost. The reduction in weight generates a higher static load capacity and an improved load chart allowing for increased outreach and load capacity up to 50% while reducing weight by 60-90%. 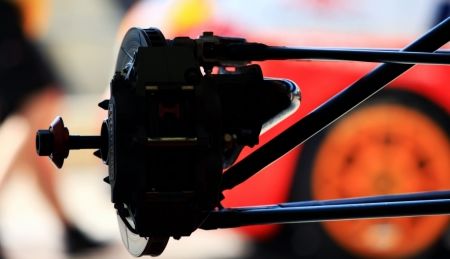 Motorsport: Many open and closed-wheeled race cars are equipped with safety tethers to connect the wheels to the chassis, preventing wheels from breaking free during an impact – making motorsport significantly safer for drivers and spectators alike.
Cables are created using the same wound unidirectional fibre process as yachting cables, providing impressive standards of safety, weight savings, reliability and resistance to corrosion, even at high temperatures. Future Fibres cables have been chosen as standard equipment for many open wheeled racing circuits.

Aerospace & Defense: Composites have evolved into a major role in all types of aerospace and defense applications for which strength, weight and reliability are all critical.
The ability to design and engineer custom cable and component solutions opens up a myriad of opportunities for driving performance improvement in both aerospace and defense.
For example: carbon rods to aid in the deployment of telecommunication satellites, safety tethers, lifting strops, locking strops to hold helicopter blades to the motor.