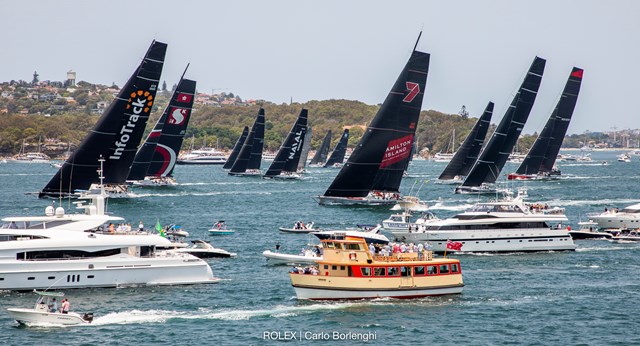 The 76th edition of the Rolex Sydney Hobart Yacht Race will be different this year with COVID-19 restrictions in place around the world, however, the quality of the fleet taking part in the boxing day race has not changed!

In less than 30 days a fleet of 89 – representing NSW, Tasmania, Victoria, Queensland, and South Australia – will set sail for the annual 628 nautical mile race. The only international entry is the super maxi Black Jack 100 who represents Monaco.

Black Jack, previously known as Alfa Romeo, is one of two super maxis taking part in the race; with Christian Beck’s InfoTrack also returning, both rigged with Southern Spars mast and boom. and both having competed in many editions of the Sydney Hobart regatta.

Black Jack, a Reichel Pugh design, was launched in 2003 and famously and repeatedly dueled with Wild Oats XI for Sydney Hobart line honours, last winning in 2009. The 100-footer was rebooted last year, and this year she will have her sights on the Hobart trophy once more.

Whilst InfoTrack, who last won line honours under the name Perpetual Loyal in 2016, will be hoping to spoil the party and take the crown for herself.

Meanwhile, eight TP52s, among them Matt Allen’s defending champion Ichi Ban, also sporting a Southern Spars rig, will be competing to lift the Tattersall Cup. This year, a Two-Handed division is also a new addition to the regatta, adding an exciting element to this already holy sailing regatta.

Over the past two decades, Southern Spars has been a dominate feature of the regatta, with our rigged yachts appearing on the podium continuously, and taking both Line Honours and Overall Winner last year. The last time someone got on the top of the podium of the Sydney to Hobart race without Southern Spars, was 2008. For the 12th consecutive year, we hope to see our record extended.

What is for sure is that this 628-mile race is definitely not to be missed, and we can’t wait to see who will be the first to arrive at Constitution Dock in Hobart.