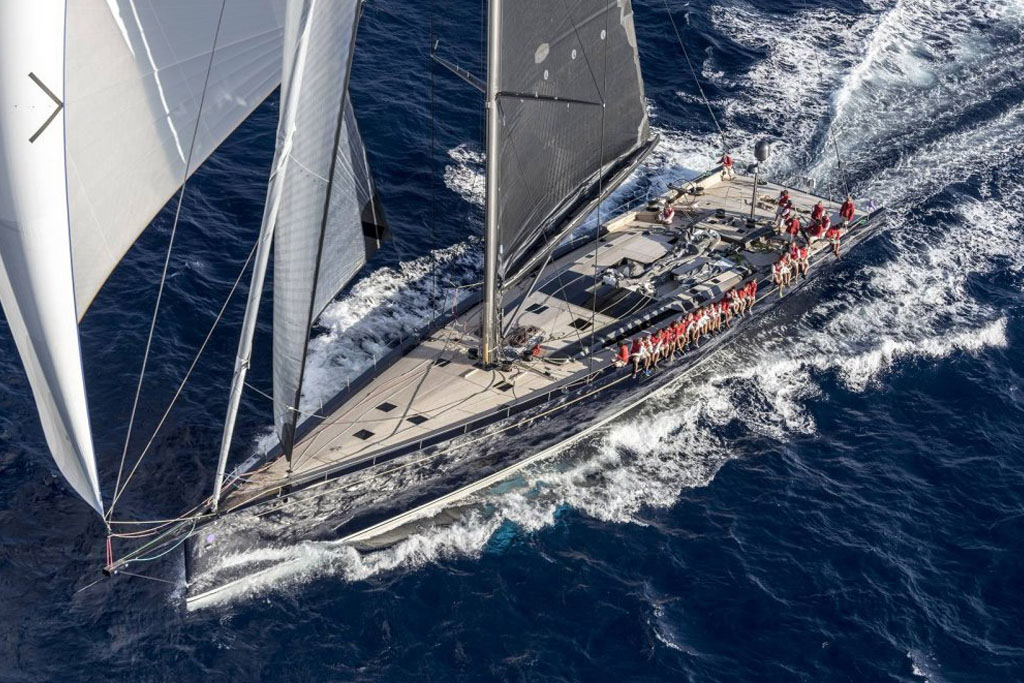 As the focus of many new superyachts widens to include high performance racing, as well as the traditional luxury cruising, rig packages are becoming increasingly complicated.

Much of Southern Spars’ work on the Baltic 130 My Song was directed towards making it possible for the yacht to switch quickly between square-top racing and pin-head delivery or cruising main sails.

When in cruising mode, the masthead is fitted with a crane and the existing backstays become a permanent arrangement for the pin-head main, which makes for easy sailing and tacking and gybing without running backstays. The switch to a square-top main sail means quickly removing the mast-crane, moving the running backstays to the crane and swapping out the cruising main for the racing sail. The upper deflectors become redundant, and the lower deflectors become the attachment point for a checkstay if a staysail is used, or the sea-state demands some additional fore/aft support for the rig. It sounds like a big job, but the crew can make this transformation inside three hours.

When in racing trim she can hit 30 knots – speeds which are usually reserved for the fastest racing yachts – yet have already been proven possible for luxury cruisers by this 110 ton vessel.

To provide the performance that My Song’s owner wanted for regatta racing, her rig design, construction and specification more resemble that of a grand prix racer than a conventional cruiser. She is fitted with halyard locks for masthead and fractional sails that are rated to 16 tons. Sail loads are supported by locks for the mainsail at full hoist as well as reefs, and all headsails, as they reduce the compression loading down the mast that would be generated by the load being generated by a halyard only.

Like many modern racing yachts, My Song makes use of backstay deflectors to react the J4 and J5 headstays when they are in use, as well as provide an efficient control mechanism for mainsail shape though a wide range of windspeed. Deflectors transfer the load of the backstay more directly to the headstay, generating exceptionally low headstay sag numbers for a yacht of this type. By directing the loadpath of the backstay into the headstay area, bending of the topmast is reduced meaning material can be removed from the section of the mast between where the forestay and backstays are connected.” This lightens and lowers the VCG of the rig overall.